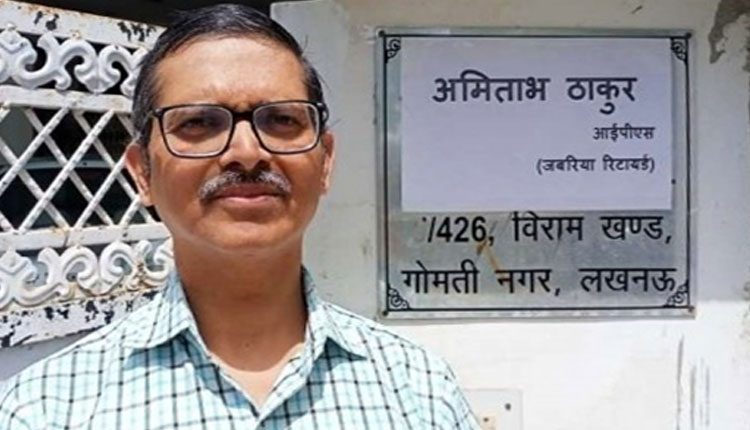 Lucknow: Retired IPS officer Amitabh Thakur has been arrested by the Lucknow police on the basis of an SIT report which found him prima facie guilty of conspiring to save BSP MP Atul Rai, who is an accused in a rape case.

The alleged rape victim had died earlier this week, days after she attempted self-immolation outside the Supreme Court in the national capital. Her companion, who had also immolated himself, also died.

Thakur tried to resist his arrest, but the cops bundled him into a police jeep and took him to the Hazratganj police station.

Hours before his arrest on Friday, the retired IPS officer had announced that he is floating his own political party.

Thakur also said that he would contest the Assembly elections against Chief Minister Yogi Adityanath from Gorakhpur.

The complainant and her companion had set themselves on fire outside the Supreme Court on August 16, after levelling serious allegations against the police and other authorities, including Thakur, SSP Amit Pathak and a judge, of conspiring against her.

The woman had lodged a rape case against Atul Rai on May 1, 2019 with the Lanka police station.

Rai, who had filed nomination as the BSP candidate from the Ghosi parliamentary seat, won the elections as an absconder and later surrendered before the court on June 22, 2019. He has been in jail since then.

iPhone 13 Series To Be Unveiled On Sep 14: Report

iPhone 13 Series To Be Unveiled On Sep 14: Report