Kandhamal: Two young villagers have been brutally killed by the Maoists suspecting the duo to be police informers.
The deceased have been identified as Bhabani Shankar Patra, son Bhandarangi sarpanch Darupati Patra, and Bhabani’s friend Hemanta Patra of Gochhaguda village under Tumudibandha block in the district here.

The barbaric act was executed by a horde of 15-20 ultras late last night.

As per reports, Bhabani was fast asleep in the Bhandarangi panchayat office when the red rebels woke him up and forced to come out. They then tied up his hands and legs with a rope and shot him dead. After killing him, his body was hung from a tree.

The Maoists left the spot and headed towards Gochhaguda village where they woke up Bhabani’s friend Hemant and also shot him dead outside.

After unleashing the reign of terror, the left wing extremists left behind hand-written notes on the spots. The notes have alleged that both the youths were killed as per the verdict pronounced by their ‘praja’ (kangaroo) court since Bhabani and Hemant were found to be police informers.

Apart from the two murders, it is being heard that three more villagers are also missing since last night.

The posters of the Maoists alleged that the two youths were awarded capital punishment as they had been responsible for the killings of their five comrades earlier in a police encounter. 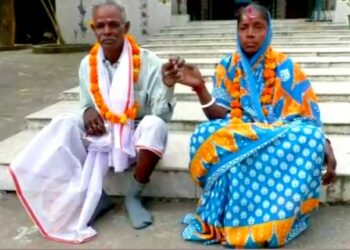