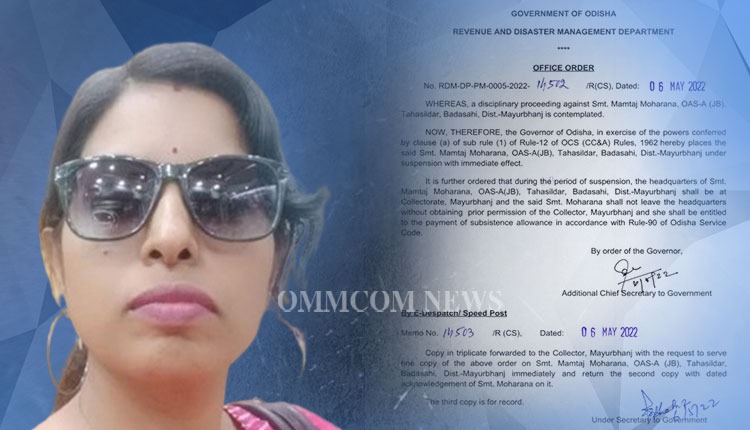 Baripada: Mamtaj Moharana, the Tehsildar of Badasahi in Mayurbhanj district, has been placed under suspension for her alleged involvement in illegal sand mining.

An order by the Revenue & Disaster Management Department stated that during the period of suspension, Moharana shall be at Mayurbhanj Collectorate and shall not leave the headquarters without obtaining prior permission of the Collector.

She shall be entitled to the payment of subsistence allowance during the period of suspension.

Disciplinary proceedings were initiated against Moharana after the National Green Tribunal (NGT) had sought an explanation from the district Collector on her conduct.

She had allegedly helped a sand mafia Pradeep Bindhani who had been awarded the sand mining lease at Dingira and Arapata riverbeds near Badasahi.

The NGT had received several complaints stating Bindhani had mined more than his limits and flouted all the guidelines and the Tehsildar helped him in doing so.

The NGT had ordered the Collector to collect Rs 17.3 Cr from Bindhani as a fine for his illegal lifting of sand and had even sought an explanation on why action should not be taken against the Tehsildar.

Will Smith's 'Emancipation' Shifting To 2023